Epiphone’s presence at NAMM 2020 marked a change in direction for the once-proud House of Stathopoulo, which is now Gibson’s wallet-friendly subsidiary.  Its portfolio has now been divided into two main lines: «Inspired by Gibson» and «Epiphone Originals». In recent years, and in the run-up to the exhibition, we’ve seen copious amounts of boastful talk about Epiphone’s rich legacy and history. Indeed, besides the obligatory cut-price versions of Gibson designs, we saw Epiphone launch a wealth of very interesting guitars – mostly archtops and acoustics – that were based on its own legacy: Centuries, Zephyrs, Emperors etc. 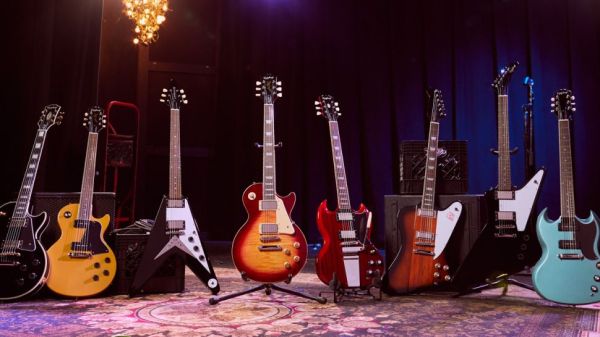 However, what we saw at NAMM 2020 tells a different story: very heavy emphasis was placed on the Gibson-derived designs, with Epiphone essentially offering affordable facsimiles of Gibson’s main new models. On the other hand, the models that were designed specifically to be sold as Epiphones were decimated, and so, the «Epiphone Originals» line pales in comparison: gone are te Centuries, Zephyrs, the Rivieras, Casinos, Wilshires, Coronets. Even the Joe Pass Emperor, a longtime stalwart for Epiphone, was axed. At this point, the only Epiphone electric guitar designs that were spared are the DC Pro solid body, the Sheraton II, the Riviera Custom P93 (but not the original Riviera), the Casino Coupe (but not the original Casino), and the Uptown Kat ES, which doesn’t have any roots in Epiphone’s history at all, but instead seems to be an attempt to capitalize on the appeal of Gretsch’s archtops.

As for acoustics, only the Texan and the Excellente remain – everything else is Gibson-derived. I must also note the complete absence of left-handed guitars in Epiphone’s new line-up – at least that’s what the version of the website that’s visible in Greece shows. Perhaps, in its infinite wisdom, Gibson’s management decided it doesn’t want a working-class left-handed clientele, who knows?

So, excuse me while I don’t share everyone’s enthusiasm about Epiphone’s «rebirth» at NAMM 2020. Some of the tackiest construction elements (the fake «one-piece mahogany body» look on SGs and Les Pauls, for instance) still remain, Epiphone’s own designs were mostly thrown out the window, and the brand seems to be eventually put on its way to become Gibson’s Squier – and, unlike Fender (and other brands like ESP, Music Man that also employ cut-price subsidiaries), Gibson doesn’t let it emphasize the family ties by using the Gibson headstock.

Epiphone, the once-proud House of Stathopoulo, is mostly known for producing affordable guitars – which is by no means a bad thing, in and of itself – with a significant part of its range being cut-price versions of the more desirable, but far more expensive, Gibson models. This leads many people to believe Epiphone is to Gibson what Squier is to Fender, although this does little justice to Epiphone and its history. Another well-known fact is that Epiphone’s versions of the Gibson originals don’t use the Gibson headstock. Also, it’s been quite a few years now that Epiphone Les Pauls and SGs feature veneers on their tops and backs to give the impression of a costlier guitar whose body back or its body, respectively, is made from a single slab of mahogany. 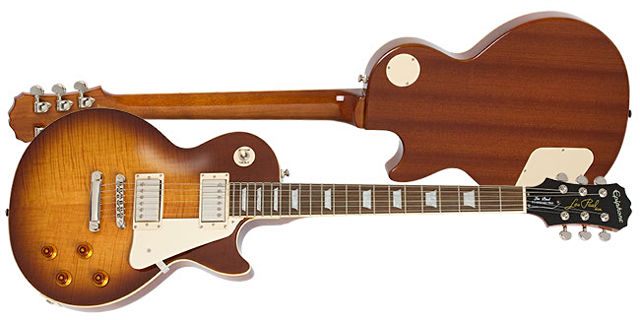 The Epiphone Les Paul Standard Plustop Pro, featuring the «clipped ear» headstock and the veneers on its top and back. Image credit: Epiphone

First things first: Epiphone is not Gibson’s Squier. In 1965, Fender had acquired V.C. Squier, a company that was making guitar, violin, and banjo strings and had no guitar-making history at all. On the other hand, when Epiphone was acquired by Gibson, it was a well-respected manufacturer in its own right, with a number of excellent, original and – yes – iconic designs that were preferred by many successful musicians, and it was a very strong competitor to Gibson itself. Even after it was acquired by Gibson, legends like John Lennon, Paul McCartney, and John Lee Hooker opted to use its instruments, and these guys were anything but poor. So, at least historically, Epiphone is a lot more than just a maker of cheap, officially-sanctioned Gibson copies for those who can’t afford the real thing.